This plant is the yellow fringeless orchid. Catesby collected one in Carolina. Look hard at his, because you probably won’t ever see it growing in the wild in this state.

Alan Weakley gives this range in his 2011 flora: “Savannas in the Coastal Plain, bogs in the Mountains and Piedmont. July-September. Essentially endemic to the Southeastern Coastal Plain, ranging from s. NJ south to FL and west to se. TX, with disjunct occurrences in TN (Eastern Highland Rim) and in bogs at low elevations of the Blue Ridge of NC. It is apparently now extirpated in the Mountains and Piedmont of NC.”

This large range notwithstanding, the yellow fringeless orchid is nearly extinct in South Carolina today. NatureServe lists it as critically imperiled in the state. The South Carolina Department of Natural Resources listed it as S2 in 2006, meaning that it was imperiled state-wide because of rarity or factors making it vulnerable.

What threatens our little orchid? Land use conversion, habitat fragmentation, and forest management practices such as fire suppression all cause problems. So does collection – so if you see one, don’t dig it up to plant it at home! (That doesn’t work for orchids anyway – they need specialized soil fungi to survive, so a transplanted orchid will likely die.)
Posted by Amy Hackney Blackwell at 6:24 AM

What to do about rattlesnake bites

Early settlers took a keen interest in rattlesnake bites and what to do about them. It must have come as a shock to Europeans to encounter snakes that could deliver such nasty bites, along with those alarming rattles.

One wonders, though, how serious the risk really was. Currently about 4000 to 7000 snakebites are reported every year in the U.S., out of a much bigger population than in the early 18th century. Epidemiology? Well, it’s a little embarrassing, but the overwhelming majority of snakebite victims are young white males, most of whom are bitten on the hands. North Carolina has the highest frequency of snakebites, and Georgia had the third-highest rate of fatalities. “Hey, ya’ll, it’s a snake! I'll git ’im!” 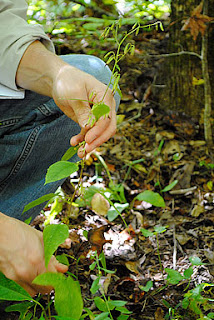 So maybe Catesby and his ilk had reason to worry. Demographically and geographically they were in snakebite central.

One sure cure for snakebite was a poultice made with rattlesnake root, from the genus Prenanthes. Prenanthes altissima, for example, grows widely in the woods in the Upstate. Here’s one growing near Oconee Station.

He did, however cite Aletris aurea, HS 232 f 105, as a possible cure: “The Root of this plant the Indians esteem good for the Bite of the Rattlesnake.”

Now this is interesting. I can’t find anyone else recommending Aletris aurea as a cure for snakebite. I consulted Dr. William M. Hand’s 1849 work The House Surgeon and Physisian: Designed to Assist Heads of Families, Travellers, and Sea-Faring People, in Discerning, Distinguishing, and Curing Diseases; with Concise Directions for the Preparation and Use of a Numerous Collection of the Best American Remedies: Together with Many of the Most Approved, from the Shop of the Apothecary. All in Plain English. Dr. Hand informed me that Aletris Aurea can be used in the same was as its relative Aletris Alba, known as colic-root, among other colorful names. Made into a tea it can be used as a purgative to treat dropsy, indigestion, and to treat hysteric and flatulent colic. But nothing about snakebite. For that you’ll need to find a Prenanthes.
Posted by Amy Hackney Blackwell at 5:37 AM

HS 232 folio 31 contains a specimen of Smilax auriculata Walter, commonly known as earleaf greenbrier. (auriculata = eared) Catesby left us a note, which I have transcribed thus: “This I think is a kind of Smilax. It's called here China Root and is much in use for Dyet Drinks and is of great esteem for its virtues.”
That last word gives me pause. “Virtues” makes sense, but I am not 100% certain that my reading is correct. Could it read “baskets”? “bidness”? “brisket”?
None of those seem likely. I’ll stick with virtues.
Anyway, the more intriguing aspect of this note is that it mentions “dyet drinks.” Of all things! Did Catesby watch his weight? Could the Coca Cola company create a new “all natural” product based on Smilax?
Our friend Google led me to enlightenment, as it always does. Smilax regelli, a related plant, seems to have been the original Sarsaparilla, and it appears that the name sarsaparilla has attached itself to various other species of Smilax. Smilax regelii grows in central and South America, but Catesby would have known about it because it came to Europe in 1500 and was widely touted as a cure for syphilis and rheumatism. Various species of smilax were used to promote sweating, as a general tonic, and to cure anything else that might be troubling you. Native Americans used Smilax to ward off illness and turn weakness to strength.
Our plant, Smilax auriculata, has tubers that can be brewed into a nice drink. Then there is this nugget of wisdom: "Smilax auriculata ... was the principle source of a delicious jelly, called "red countie," formerly prepared by Indians of the southeastern United States from the fecula contained in its root stalks and tubers."
What about “China Root”? There is a Chinese species of smilax called Smilax china. It’s a traditional Chinese remedy for gout, rheumatoid arthritis, and other diseases. I is said to be a diuretic, febrifuge, tonic, and anti-inflammatory, useful for flatulence, leprosy, epilepsy, and insanty, among other conditions. Believe it or not, Chinese medical researchers have just verified that it is a useful treatment for kidney disease. (Chen, 2011, Anti-hyperuricemic and nephroprotective effects of Smilax china L.) Smilax china commonly goes by the name China root; it is also called madhunuhi.
My quick search has not revealed to me why Catesby used the common name China Root in 1721 to refer to an American plant. It suggests that the generic name Smilax and the plants of that genus were in wide enough use in Europe for all of them to blend together.
And the dyet drinks? The drink sarsaparilla became popular in New Orleans in the 1800s, and it's certainly a standby in old-timey literature that features soda fountains. Pharmacists would brew Smilax root with licoric, cassia (maybe cinnamon if they could get it?), ginger, cloves, and coriander, which they would then mix with syrup, honey, tincture of ginger, and citric acid to create a refreshing beverage. Could be worth a try.
Posted by Amy Hackney Blackwell at 8:06 AM

This project is a collaboration between institutions and disciplines. Its principal researchers are:
· Patrick McMillan, Director of the South Carolina Botanical Garden at Clemson University,
· Amy Hackney Blackwell, researcher in Plant and Environmental Science at Clemson University and freelance writer on scientific, historical, and legal topics,
· Christopher Blackwell, the Louis G. Forgione University Professor of Classics, Furman University.