Endangered Species in my backyard

The New York Times had two good articles on endangered species in May. First there was on zoos, which must choose which species to save while letting others in their collections go extinct - a concept relevant to botanical gardens as well, which can only grow so many plants. Then there was an op-ed on endangered ecosystems, which mentioned the IUCN Red List, which at the moment contains nearly 20,000 endangered species. This caught my eye because I've been reading IUCN reports of endangered plants for my work updating a guide to endangered species. I only look at IUCN listings of plants that are also listed under the U.S. Endangered Species Act, so it's not that many, but what have noticed is that the Red List information is not always current. Many listings date from 1998, which was a long time ago in a world whose human population now adds a billion people every decade. This is NOT to criticize the IUCN, but to suggest that things may be much worse than we know.

It may also to be to express a wish that reports on endangered and rare species include dates when describing abundance and distribution - it makes no sense to use the present tense when reporting data that was gathered in the past and that almost certainly does not describe a current state of affairs. A claim that "There are currently 15 populations with a total of 150 plants" is senseless if it is based on censuses done in 1982, 1991, and 1993, with different sites visited at different times.

Our own endangered species list contains some alarming reports. Eragrostis fosbergii, Fosberg's love grass, has not been seen since 1996. There are no specific conservation measures currently underway for this species - how could there be? For the moment it is still considered "in danger of extinction throughout its range." I'll say. But is it extinct? How can we know?

In this job I got to update the reports on two endangered plants that I know personally, the bunched arrowhead, Sagittaria fasciculata, 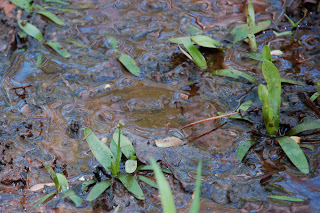 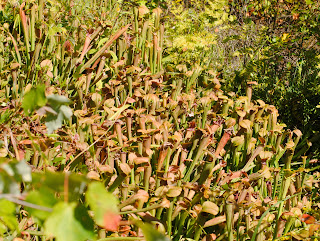 The depressing thing is that my updates were nothing of the kind. The USFWS has not published 5-year reviews on these species. The most current information on these two plants comes from Recovery Plans that date from the 1990s. The Center for Plant Conservation's reports are not much more recent. Likewise the Nature Conservancy's. I've noticed this about other Carolina plants, such as Geum radiatum from Roan Mountain. California and Hawaii have good up-to-date information on their endangered plants. Our neck of the woods? Not so much.

Anyway, these are nice little plants. Much collected, perhaps trampled by hogs. Not many left. I'm not saying where they are, but it's not hard to figure out if you're interested in grabbing the last ones.


Posted by Amy Hackney Blackwell at 9:21 AM

Painting and Specimen, side by side

Mark Catesby's Natural History of Carolina, Florida and the Bahama Islands, published between 1729 and 1747, is justifiably famous for being the first work in English to describe the natural history of a region of North America. Catesby illustrated this volume himself with engravings of the plants he had seen and collected during his travels in the Carolinas, etc., between 1721 and 1726. Catesby apologized for his deficits as a painter, a trade for which he was untrained, but on the whole did a decent job. The publication of the Natural History was a big deal among western European naturalists; Catesby got elected to the Royal Society in 1733 on the strength of his work, and Linnaeus himself cited a number of Catesby's plates while describing North American species in his Species Plantarum.

But here's the thing - Catesby only painted a small portion of the plants he saw, and only a very small portion of the plants he collected. Of the 432 (or so) vascular plant specimens in the two volumes in the Sloane, 64 of them have corresponding engravings in the Natural History, and many of those are duplicates. That leaves 368 specimens with no paintings. That correspondence is not entirely accurate, either; it's based on notes made on the folio pages by previous scholars who examined the Sloane collections with an interest mainly in their relationship to the Natural History. There are some specimens that do not appear to be exactly what Catesby has painted.

Digitizing these collections makes two new things possible. First, we can now examine the full body of Catesby's scientific work, his actual collected data (a collection that will be fuller once we combine the Sloane materials with the Sherard specimens from Oxford). Second, we can easily examine Natural History engravings and herbarium specimens side by side.

You can see these images side by side here, Alignment of Mark Catesby's Hortus Siccus with his Natural History. We've transcribed the printed descriptions from the Natural History along with any handwritten notes on the specimen pages. There are a few specimens that previous researches linked with different pages in the Natural History from the ones that we identified; in those cases, we've posted both Natural History pages so you can see for yourself what's going on.
Posted by Amy Hackney Blackwell at 7:43 AM

This project is a collaboration between institutions and disciplines. Its principal researchers are:
· Patrick McMillan, Director of the South Carolina Botanical Garden at Clemson University,
· Amy Hackney Blackwell, researcher in Plant and Environmental Science at Clemson University and freelance writer on scientific, historical, and legal topics,
· Christopher Blackwell, the Louis G. Forgione University Professor of Classics, Furman University.